As environmentalists in Far North Queensland gear up for a campaign to stop this very special part of the world being assaulted by the coal seam gas (CSG) industry, here are two items of good cheer. 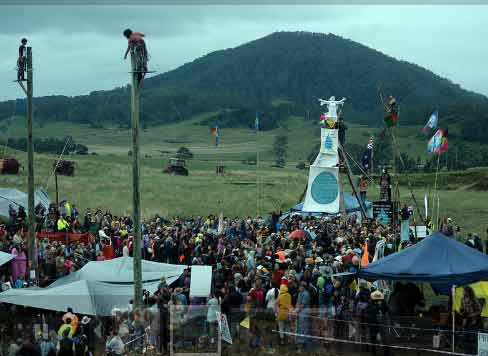 On 16th may, the New South Wales Government suspended the licence of the coal seam gas company Metgasco and referred the matter to the NSW Independent Commission Against Corruption.

It’s a sudden – and very positive – turn-around. Only days ago, it seemed this broadly-supported blockade of Metgasco drilling would be broken up by police. Now the company’s share price has plummeted – and at the very least, drilling will be delayed. Activists will keep pushing for a permanent ban.

Secondly, wherever you are, there’s already great fracking protest music to enjoy and share around.

Leo Sayer’s No Fracking Way is a new Australian classic!

Maybe Leo and friends would like to sing it with us at the Kuranda Amphitheatre?