Friends of the Earth Kuranda organized a forum on 26th May 2014. The Forum focused on the Kuranda town water, which is supplied from the Barron River.

The forum was attended by the Mareeba Shire Mayor Tom Gilmore, Deputy Mayor Jenny Jensen and a senior council staff member, plus a wide cross-section of people from the local area. 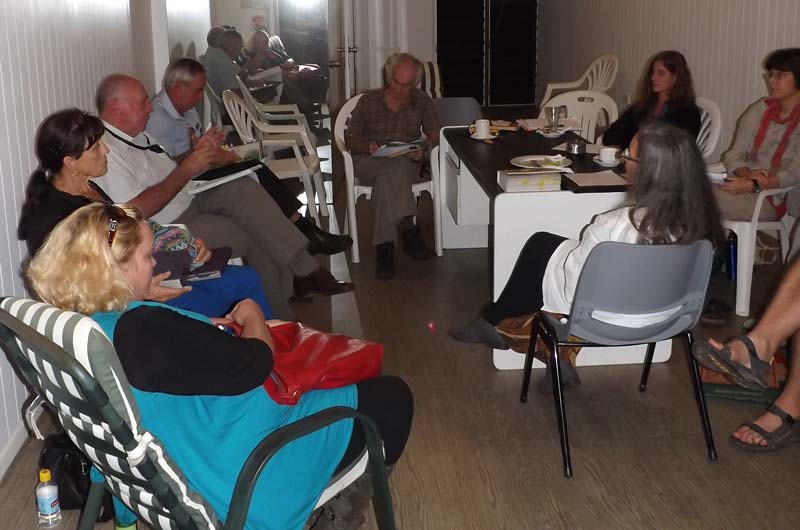 “The quality of the water and the environmental health in the Barron River is not a Local, but a State Government responsibility” explained Mayor Tom Gilmore at the Kuranda Water Forum.,

In Queensland the State Government has delegated to local government authorities the responsibility to supply and test drinking water before it sells it to the consumer on the basis that it has a “drinking water management plan in place” and “has undertaken risk assessments, assessed the hazards and has tested accordingly”

Morris Hamill, the Senior Council Officer responsible for Waste & Water, explained that the Mareeba Council pumps water from the Barron andpasses it through a sand filter. A liquid polymer-based chemical is used to remove sediment. Chlorine is added to kill bacterial contaminants.

Under the Queensland Government’s risk assessment guidelines, the Council tests twice a year for the presence and concentration of the some 26 pesticides and has done since the 1990’s. Dr Jon Brodie, an expert in water quality at James Cook University, has previously reviewed the test results and reported that council was testing for pesticides that in all probability are not being used in the catchment – and failing to test for others that are used.

Hundreds of tons of petro-nitrogen fertilizers and 1,000’s of litres of a diverse range of chemicals are used by the various farming enterprises, much of which ends up by being leached into the Barron.

Tom Gilmore said he thinks the dangers of pesticides are exaggerated, noting that reputable scientists test these chemicals – and he’s still alive having used them often as a farmer. Further he said he has no concerns about the quality of the Kuranda town water.

Deborah a spokesperson from Frog Safe advised the forum that thousands of chemicals are used in Australia and only desktop research is done on their dangers and little to no research done on the synergistic effect of these chemicals on humans and wildlife. She circulated an album of photos of frogs taken from the Barron River with cancers. Frogs are often seen as an indicator of the health of the environment

The Vice-President of the Djabugay Tribal Council told the Forum that he believed the riverine environment in the Kuranda area has declined. He has concerns about locals swimming in the water and supplementing their diet with fish caught from the water.

Mayor Gilmore said Council has no funding to do an audit for chemicals that may be in the drinking water. It has no plans to advocate on this issue with State Government.

Local Councillor and Deputy Mayor Jenny Jensen advised that the Council has looked for an alternative bore water supply, without success – so Kuranda has no alternative but to continue to source water from the Barron River.