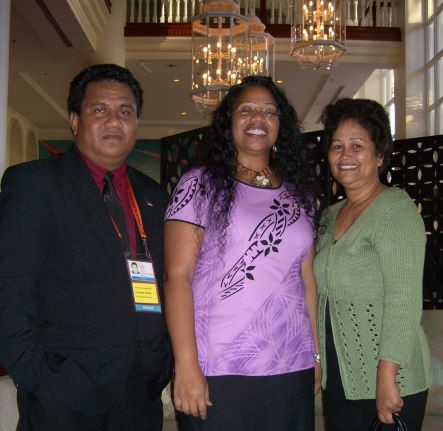 Since the early 2000s, FoE Australia has raised awareness about the impacts of climate change on the peoples of the Pacific Islands region. Our research, publications and events have highlighted the effects of more frequent and more extreme weather events, sea level rise and ocean warming and acidification - and the threat of displacement and forced migration.

In 2009 the Climate Frontlines group was formed by FoE Brisbane. The name was taken from a theme adopted that year by the United Nations Environment Program (UNEP). Climate Frontlines began building relationships with Pacific Islands diaspora communities in the wider Brisbane area. One of these groups was the Kiribati Australia Association, chaired by Wanita Limpus, who had migrated to Brisbane with her family some years earlier.

In October 2009, the official intergovernmental Pacific Islands Forum (PIF) meeting was hosted in Cairns by then PM Kevin Rudd. Many environmental organisations met in advance and sent delegations to Cairns for a parallel forum in the hope of influencing the official agenda and negotiations. As the Climate Frontlines coordinator, I arranged for Wanita Limpus to accompany me to this forum.

Before the meetings started, we met up with both Syd Walker and the wonderful John Gleu in Kuranda, then coordinator of FoE FNQ. During the meetings, Wanita learned that she was being awarded the Kiribati Medal of Honour. This was in recognition of the voluntary assistance Wanita had provided over many years to workers from Kiribati experiencing difficulties in the Australian government Seasonal Worker Program.

Starting in 2012, Climate Frontlines established contact with Torres Strait Island communities, especially in the northwest and central islands already experiencing severe impacts of climate change. It organised public awareness raising events with two Brisbane based leaders, Aunty Rose Elu and Uncle Thomas Sebasio (who sadly passed away a few years ago). One event was held in Cairns in February 2013. In 2015 I was able to arrange to send Aunty Rose as a civil society representative to the annual UNFCCC negotiations in Paris, which resulted in the well-known Paris Climate Agreement.

ACTION: To find out more, see some of these webinars on www.foe.org.au and subscribe to the national FoE magazine Chain Reaction- the next edition is focusing on this topic.
Wendy Flannery, Coordinator, FoE Climate Frontlines & FoE FNQ member.

This article was first published in The Kuranda Paper March 2022 #340.