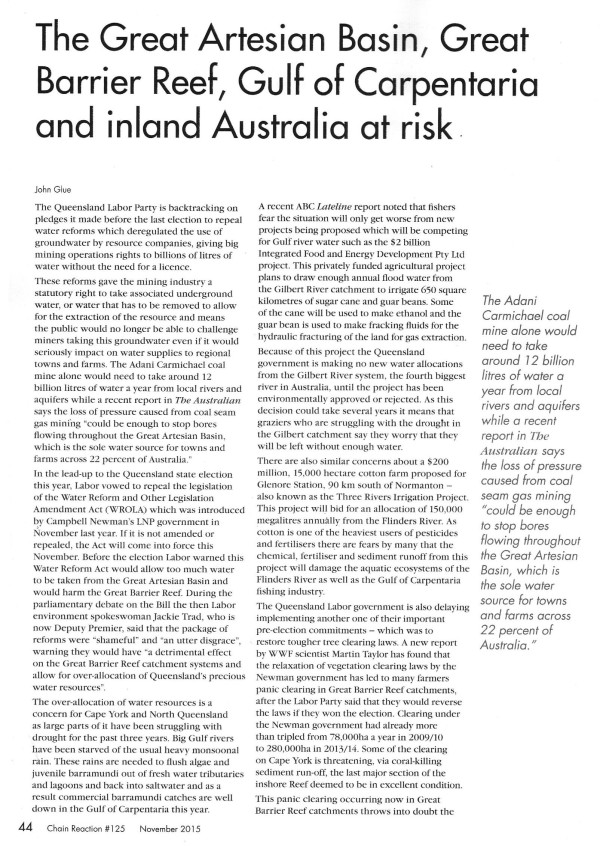 These reforms gave the mining industry a statutory right to take associated underground water, or water that has to be removed to allow for the extraction of the resource and means the public would no longer be able to challenge miners taking this groundwater even if it would seriously impact on water supplies to regional towns and farms. The Adani Carmichael coal mine alone would need to take around 12 billion litres of water a year from local rivers and aquifers while a recent report in The Australian says the loss of pressure caused from coal seam gas mining "could be enough to stop bores flowing throughout the Great Artesian Basin, which is the sole water source for towns and farms across 22 percent of Australia."

In the lead-up to the Queensland state election this year, Labor vowed to repeal the legislation of the Water Reform and Other Legislation Amendment Act (WROLA) which was introduced by Campbell Newman's LNP government in November last year. If it is not amended or repealed, the Act will come into force this November. Before the election Labor warned this Water Reform Act would allow too much water to be taken from the Great Artesian Basin and would harm the Great Barrier Reef. During the parliamentary debate on the Bill the then Labor environment spokeswoman Jackie Trad, who is now Deputy Premier, said that the package of reforms were "shameful" and "an utter disgrace", warning they would have "a detrimental effect on the Great Barrier Reef catchment systems and allow for over-allocation of Queensland's precious water resources".

The over-allocation of water resources is a concern for Cape York and North Queensland as large parts of it have been struggling with drought for the past three years. Big Gulf rivers have been starved of the usual heavy monsoonal rain. These rains are needed to flush algae and juvenile barramundi out of fresh water tributaries and lagoons and back into saltwater and as a result commercial barramundi catches are well down in the Gulf of Carpentaria this year.

A recent ABC Lateline report noted that fishers fear the situation will only get worse from new projects being proposed which will be competing for Gulf river water such as the $2 billion Integrated Food and Energy Development Pty Ltd project. This privately funded agricultural project plans to draw enough annual flood water from the Gilbert River catchment to irrigate 650 square kilometres of sugar cane and guar beans. Some of the cane will be used to make ethanol and the guar bean is used to make fracking fluids for the hydraulic fracturing of the land for gas extraction.

Because of this project the Queensland government is making no new water allocations from the Gilbert River system, the fourth biggest river in Australia, until the project has been environmentally approved or rejected. As this decision could take several years it means that graziers who are struggling with the drought in the Gilbert catchment say they worry that they will be left without enough water.

There are also similar concerns about a $200 million, 15,000 hectare cotton farm proposed for Glenore Station, 90 km south of Normanton ? also known as the Three Rivers Irrigation Project. This project will bid for an allocation of 150,000 megalitres annually from the Flinders River. As cotton is one of the heaviest users of pesticides and fertilisers there are fears by many that the chemical, fertiliser and sediment runoff from this project will damage the aquatic ecosystems of the Flinders River as well as the Gulf of Carpentaria fishing industry.

The Queensland Labor government is also delaying implementing another one of their important pre-election commitments ? which was to restore tougher tree clearing laws. A new report by WWF scientist Martin Taylor has found that the relaxation of vegetation clearing laws by the Newman government has led to many farmers panic clearing in Great Barrier Reef catchments, after the Labor Party said that they would reverse the laws if they won the election. Clearing under the Newman government had already more than tripled from 78,000ha a year in 2009/10 to 280,000ha in 2013/14. Some of the clearing on Cape York is threatening, via coral-killing sediment run-off, the last major section of the inshore Reef deemed to be in ­excellent condition.

This panic clearing occurring now in Great Barrier Reef catchments throws into doubt the federal and state governments claims that they will be able to meet UNESCO demands to stop coral and seagrass dieback with the latest report card for the Great Barrier Reef saying 'the inshore marine environment remains poor and progress towards water quality improvement targets has slowed dramatically'.

A consortium of scientists from the University of Queensland's National Oceanic Atmospheric Administration estimate that we have lost 40% of corals around the world in the past 30 years alone and the University of Queensland's Global Change Institute director Ove Hoegh-Guldberg has said that "they expect the complete loss of coral reefs by the middle of this century." This confirms a report released by Environmental Justice Australia lawyer Ariane Wilkinson, which was compiled by Australian and international lawyers, which says the Reef World Heritage Area should now be listed as in danger by UNESCO due to degradation and overdevelopment. 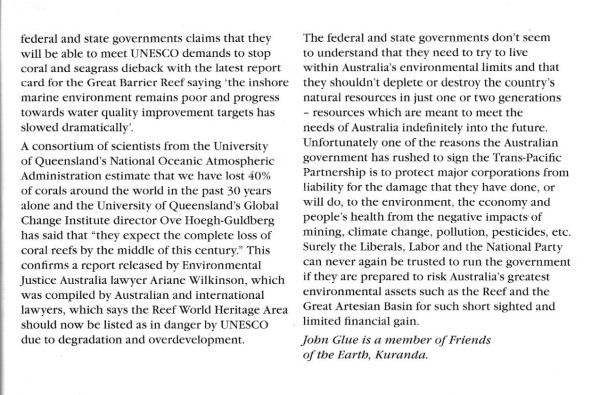 The federal and state governments don't seem to understand that they need to try to live within Australia's environmental limits and that they shouldn't deplete or destroy the country's natural resources in just one or two generations – resources which are meant to meet the needs of Australia indefinitely into the future. Unfortunately one of the reasons the Australian government has rushed to sign the Trans-Pacific Partnership is to protect major corporations from liability for the damage that they have done, or will do, to the environment, the economy and people's health from the negative impacts of mining, climate change, pollution, pesticides, etc. Surely the Liberals, Labor and the National Party can never again be trusted to run the government if they are prepared to risk Australia's greatest environmental assets such as the Reef and the Great Artesian Basin for such short sighted and limited financial gain.