The Government Reveals its Big Vision for North Queensland

Tony Abbott and Leichhardt M.P Warren Entsch revealed their vision for Northern Australia for the next 20 years in their new newly released Northern Australia White Paper. The White Paper predicts that by then north Australia will have a population of 6 million and that the region will become a food bowl for Asia supplied from new mega farms. The ministers’ vision also includes Cairns soon getting Mr Fung’s mega Aquis Casino.

The bulldozing that has just begun of 32,000 hectares of open forest at Olive Vale near Laura, using a pair of huge D11 bulldozers linked by a long chain, is part of this plan for what the Govt. says is ‘sustainable development and innovative new crops for the north’. In the case of Olive Vale the crop is to be forage sorghum for cattle feed and in other areas it will be crops like sugar cane, stock fed and bio-mass.

Despite the claims by Senator Warren Entsch that the clearing of 32,000 hectares at Olive Vale was an example of ‘sustainable development’ and of ‘innovative new crops’ the clearing has been stopped after 2500 hectares have been bulldozed at the request of Queensland Deputy Premier Jackie Trad so the project can be assessed under the Environmental Protection and Biodiversity Conservation Act.

The main reasons given for stopping the clearing is that Olive Vale is home to several rare, endangered and vulnerable species and because forage sorghum for cattle feed doesn’t qualify as being an innovative new crop. Also another problem with these mega farms is the Gulf of Carpentaria, the Great Barrier Reef and Cape York’s river systems may be severely damaged by the added sediment, nutrient and chemical, runoff that will be produced.

The recently released Queensland Auditor General’s report says efforts to repair Reef water quality are unlikely to be successful even after multimillion-dollar programs aimed at the preventing the World Heritage Committee listing the Great Barrier Reef as being ‘in danger’. The report also found ‘the grazing and cane industries voluntary and self-assessed schemes – introduced by the previous government to replace regulation – were not achieving changes needed to improve water quality’ and the government’s ‘water quality information lacked transparency and was misleading’.

Overall the Auditor General’s report finds the current efforts to cut coral-killing run-off from land degradation and over-development have been largely ineffective. This conclusion means that the Govt has been trying to hide from the World Heritage Committee that the Great Barrier Reef really is ‘in danger’ – possibly to try and avoid the bad publicity that this would bring to Australia. This is confirmed by the latest studies showing that the Reef has lost half its coral cover in the last 30 years.

Research just released by Centre of Excellence for Coral Reef Studies at James Cook University have found suspended sediment in water damages fish gills, makes it hard for them to breathe and increases the rate of diseases in fish and is another blow to the Govt’s plans for mega developments in the north.

New Study Finds We Are Witnessing the Start of a Mass Extinction Event.

A new study published in the journal Science Advances found we are currently witnessing the start of a mass extinction event the likes of which have not been seen on Earth for at least 65 million years. The research was designed to determine how human actions over the past 500 years have affected the extinction rates of vertebrates: mammals, fish, birds, reptiles and amphibians.

The fact that Australia is ranked as one of the worst countries in the world for species loss is another reason why the new Labor government needs to quickly restore strong tree clearing controls as it promised to do and especially considering tree clearing rates in Queensland are now triple what they were in 2009. 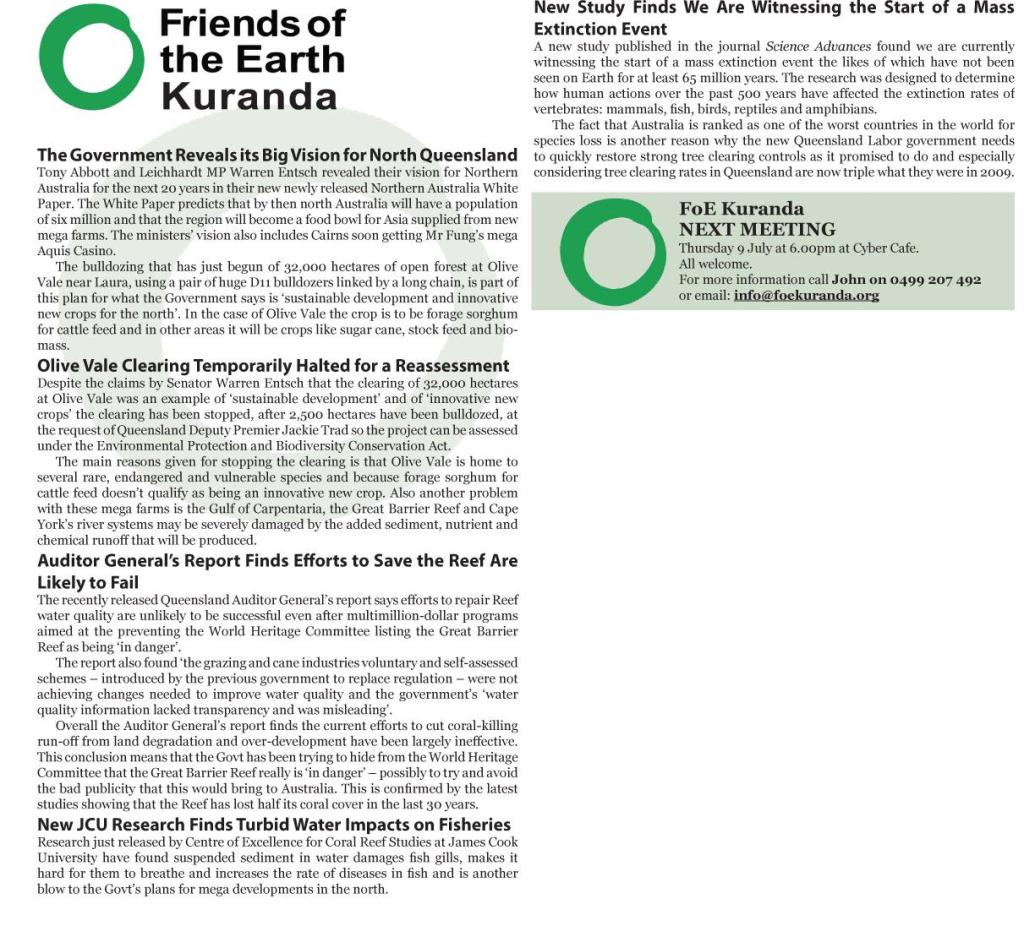