FoE Kuranda asked Andrew Picone of the Australian Conservation Foundation to give his thoughts on the recent Queensland election and an overview of the outcome.

Narrowly avoiding a hung parliament, Queensland has a new government. The LNP were removed from office through a revolt at the ballot box. Civil society including unions, NGOs, church groups and charities took a stand and called an unpopular government to account over unnecessary and ill-informed policies.

The importance that environmental issues had on the election results was significant. The Great Barrier Reef, front and centre of Australia’s iconic image to the world is perilously close to being listed as endangered by the World Heritage governing body, UNESCO.  Dredging, coal, coal seam gas, climate change, bleaching, run-off and pollution all need urgent attention yet little was being done to stop these threats by the LNP.

In Townsville, the prospect of uranium mining in the Burdekin catchment was enough to see three electorates ditch the LNP. With Labor’s solid position to ban uranium mining in Queensland, they took three out of four seats in the area.

On Cape York Peninsula a resurgence back to Labor saw Billy Gordon elected as the Member for Cook. With the defeat of the LNP after only one term, we now have the opportunity to address some of the most significant threats to Queensland’s environment.

But how good is the Labor Party?

In August 2014, Queensland Labor released their State Policy Platform which outlines most of their commitments. It is both broad and specific.  For example of broad statements, there is a re-commitment to return to the principles of ecologically sustainable development. Something the previous government explicitly departed from. In addition, climate change is acknowledged and there is a commitment to move towards a ‘low emissions Queensland economy’.

Specifically there are clear statements that are broadly consistent with a number of campaign goals for various organisations. This includes rejecting the divestment of Commonwealth powers to the state, restoring funding for volunteer dependent organisations, supporting a World heritage nomination for Cape York with Traditional Owner consent, repealing the LNP’s pro-mining legislation on Stradbroke Island and more.

Preferences from the Greens, Independents and other minor parties helped to get Labor 44 seats. Only with the support from Independent Peter Wellington is Labor able to claim Government. In this position, Labor will be cautious in implementing any of its policies. Despite this, the conservation movement must prosecute its case for better outcomes and greater accountability. Andrew Picone, Northern Australia Program Officer, ACF, Cairns.  [email protected] 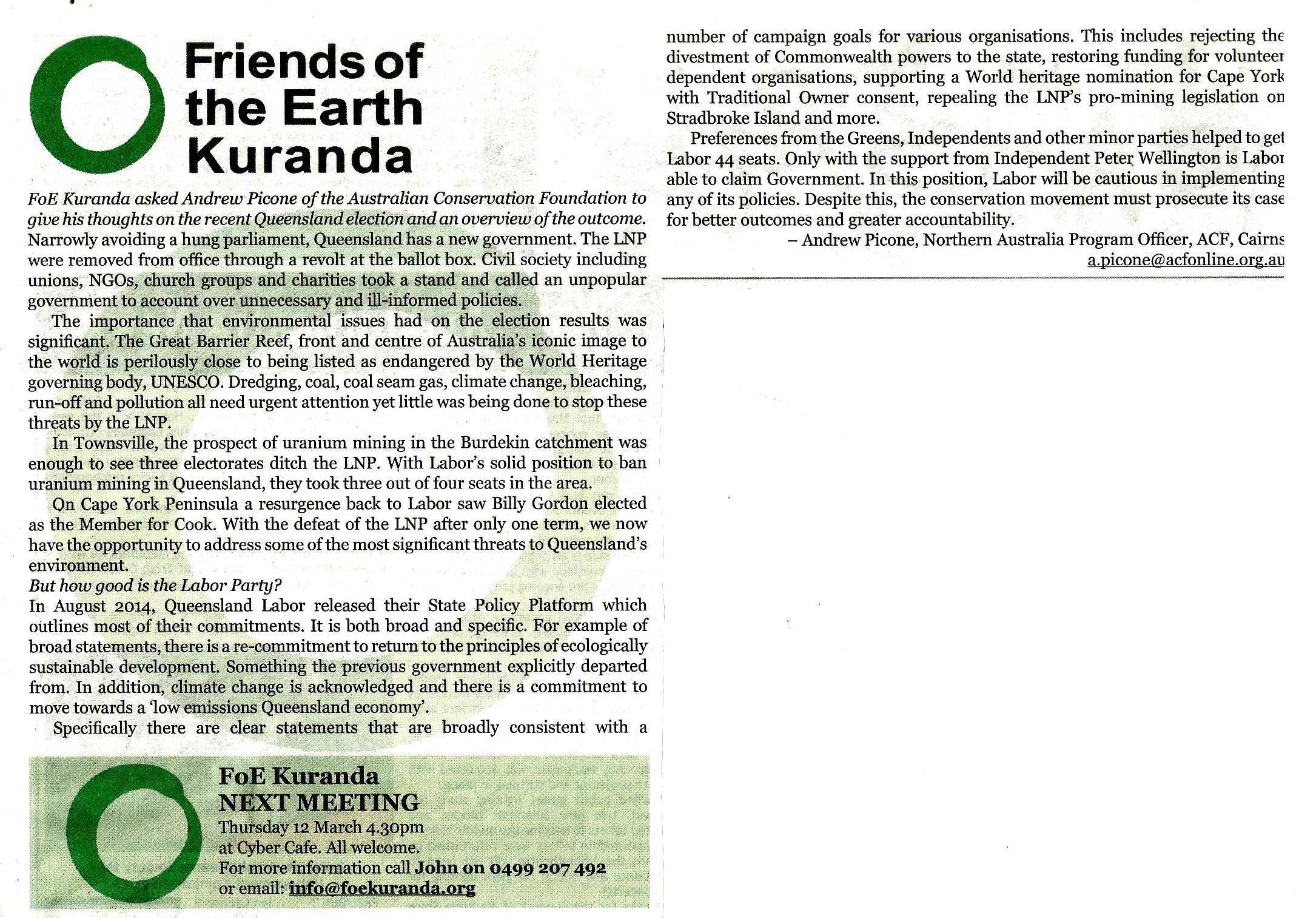