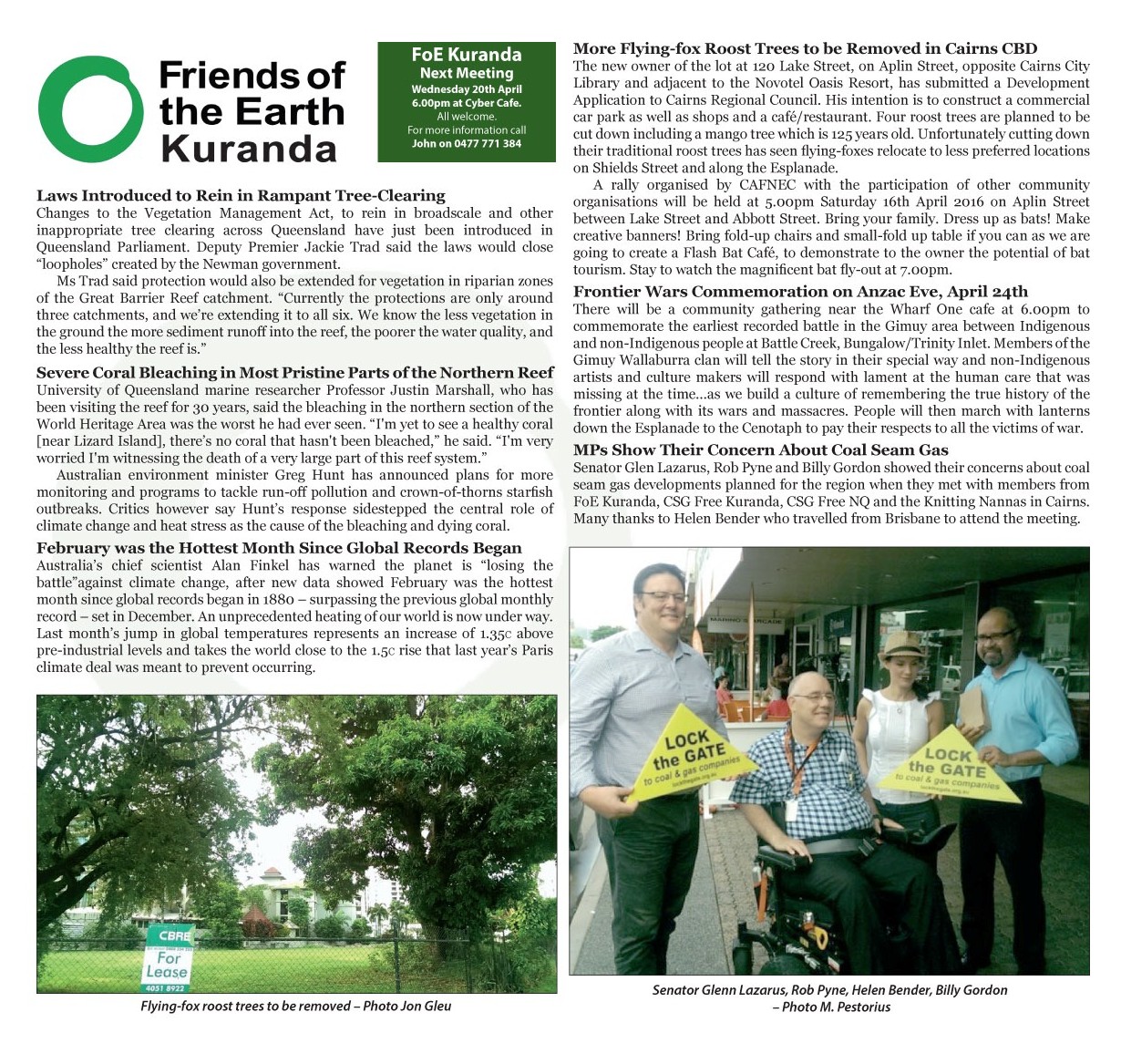 Changes to the Vegetation Management Act, to rein in broadscale and other inappropriate tree clearing across Queensland have just been introduced in Queensland Parliament.  Deputy Premier Jackie Trad said the laws would close "loopholes" created by the Newman government.

Ms Trad said protection would also be extended for vegetation in riparian zones of the Great Barrier Reef catchment. "Currently the protections are only around three catchments, and we're extending it to all six. We know the less vegetation in the ground the more sediment runoff into the reef, the poorer the water quality, and the less healthy the reef is."

Severe Coral Bleaching in Most Pristine Parts of the Northern Reef

University of Queensland marine researcher Professor Justin Marshall, who has been visiting the reef for 30 years, said the bleaching in the northern section of the World Heritage Area was the worst he had ever seen. "I'm yet to see a healthy coral [near Lizard Island], there's no coral that hasn't been bleached," he said. "I'm very worried I'm witnessing the death of a very large part of this reef system.”

Australian environment minister Greg Hunt has announced plans for more monitoring and programs to tackle run-off pollution and crown-of-thorns starfish outbreaks. Critics however say Hunt’s response sidestepped the central role of climate change and heat stress as the cause of the bleaching and dying coral.

February was the Hottest Month Since Global Records Began

Australia's chief scientist Alan Finkel has warned the planet is "losing the battle" against climate change, after new data showed February was the hottest month since global records began in 1880 - surpassing the previous global monthly record - set in December. An unprecedented heating of our world is now under way. Last month’s jump in global temperatures represents an increase of 1.35C above pre-industrial levels and takes the world close to the 1.5C rise that last year’s Paris climate deal was meant to prevent occurring. 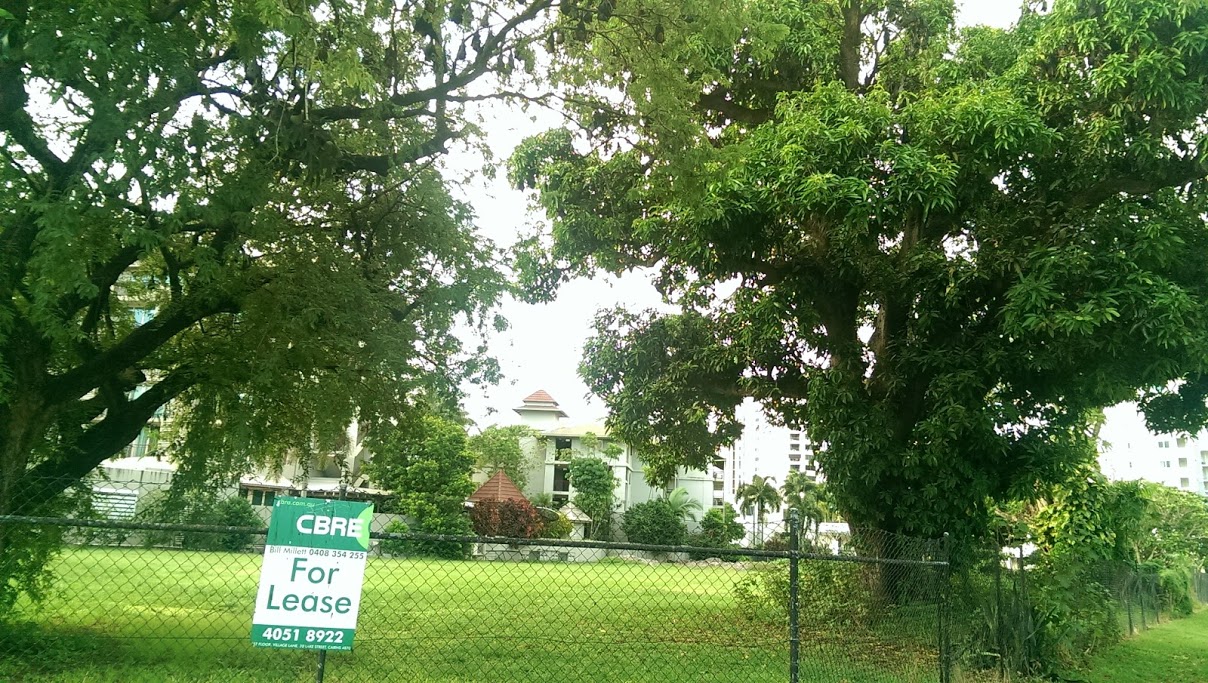 The new owner of the lot at 120 Lake St, on Aplin St, opposite Cairns City Library and adjacent to the Novotel Oasis Resort has submitted a Development Application to Cairns Regional Council. His intention is to construct a commercial car park as well as shops and a café / restaurant.  Four roost trees are planned to be cut down including a mango tree which is 125 years old.  Unfortunately cutting down their traditional roost trees has seen flying-foxes relocate to more public locations on Shields St and along the Esplanade.

A rally organised by CAFNEC with the participation of other community organizations will be held at 5pm Sat 16 April 2016 on Aplin St between Lake St and Abbott St. Bring your family. Dress up as bats! Make creative banners! Bring fold-up chairs and small fold up table if you can as we are going to create a Flash Bat Café, to demonstrate to the owner the potential of bat tourism. Stay to watch the magnificent bat fly-out at 7pm.

There will be a community gathering near the Wharf One cafe at 6.00 pm to commemorate the earliest recorded battle in the Gimuy area between Indigenous and non-Indigenous people at Battle Creek, Bungalow/Tinity Inlet. Members of the Gimuy Wallaburra clan will tell the story in their special way and non-Indigenous artists and culture makers will respond with lament at the human care that was missing at the time...as we build a culture of remembering the true history of the frontier along with its wars and massacres. People will then march with lanterns down the Esplanade to the Cenotaph to pay their respects to all the victims of war. 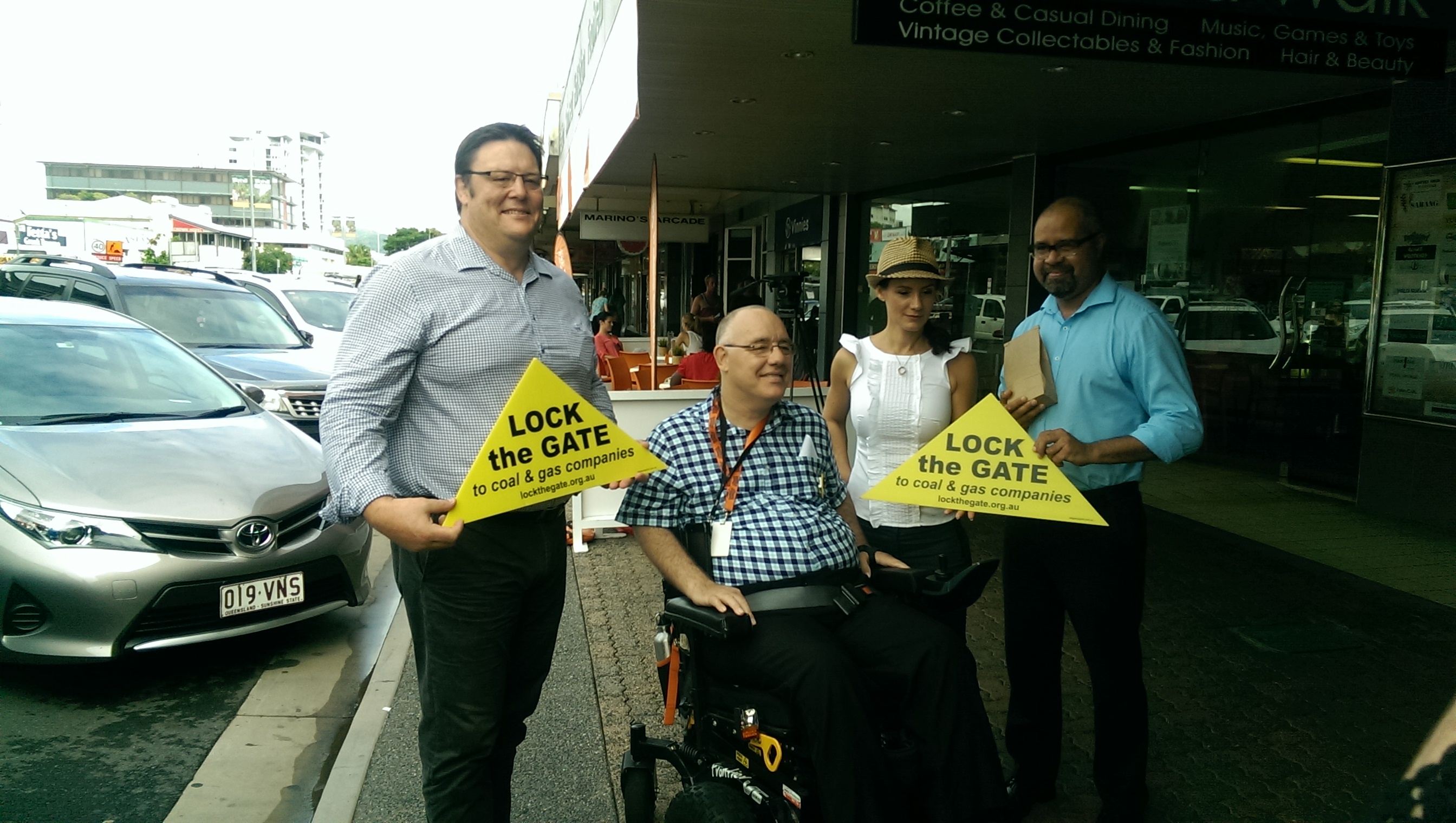 Senator Glen Lazarus, Rob Pyne and Billy Gordon showed their concerns about coal seam gas developments planned for the region when they met with members from FoE Kuranda, CSG Free Kuranda, CSG Free NQ and the Knitting Nannas in Cairns. Many thanks to Helen Bender who travelled from Brisbane to attend the meeting.