A French uranium company is pulling out of exploration around Karumba and Carpentaria basins following the new State Government’s ban on uranium mining throughout Queensland and a general downturn in the uranium market.

FoE asked Jax from Kuranda Conservation Community Nursery for her opinion on the over 2,000 hectares of native vegetation that have cleared for plantation pine trees around Kuranda under a 99 year licence.

“Caribbean Pine is not native to this region nor does it grow particularly good timber here and its use in this region robs the environment of natural habitat.  Any non-native timber trees need to be assessed for both their commercial and their environmental value.
The solution for timber plantations in environmentally rich areas like Black Mountain Road is to plant local native timbers that provide habitat and food for the local wildlife.  Examples of suitable timbers abound:  Blue/silver quondong has a high quality white timber, is useable in 7-10 years and provides food and habitat for our local wildlife.   Kuranda quondong, Steelbutt, Kuranda’s own cadagi, and Candlenut are just a few that would be more appropriate.

The argument the plantation growers put forward is that it’s the Caribbean pine that the market is asking for, but the reason for this is that no alternatives have been offered.  There’s a whole world of trees out there that can be supplied cheaper and better than Caribbean pine.  We should be lobbying for the end of environmentally damaging timber plantations and replanting with better, more appropriate local species.”

FoE is also concerned about the heavy herbicide spraying that these plantations require and the impact the runoff will have on the Barron River and Kuranda’s town water supply, not to mention to the native wild life such as cassowaries and the frogs, and the reef.

Approvals have now been issued to remove 19 of the trees, predominantly mangoes, which were planted by the students of the Cairns Central School, the prior occupant of this site, since the first Arbour Day plantings in Queensland on 1 August 1890, an event created to celebrate the anniversary of the coronation of Queen Victoria.

The preliminary plans for the new aquarium retained the trees and even had a flying fox viewing platform to add to the nature experience for aquarium visitors. Mr Mark Buttrose, EDO NQ President, said ”These historic trees now appear to have become disposable for Council, the resort and the aquarium, despite thousands of Cairns residents signing a petition to not disturb the CBD flying fox camp at the library and the resort. Cairns Regional Council and some tourism operators seem incapable of appreciating the tourism value of large, mature historic trees and the threatened species that roost in them”.

Coral in the Great Barrier Reef are Mistaking Micro Plastics for Food and Will Suffer Widespread, Irreparable Damage.

Studies conducted by James Cook University researchers revealed coral, turtles and sea birds that ingested micro plastics suffered blockages to their digestive tracts and other health impacts.  Micro plastics in the water came from a variety of sources such as from the breakdown of larger plastics from litter, plastics which aren’t disposed of properly on land and are washed out into the ocean and through waste treatment.  Reducing plastic use and taking part in Clean Up Australia days are all ways we can help. 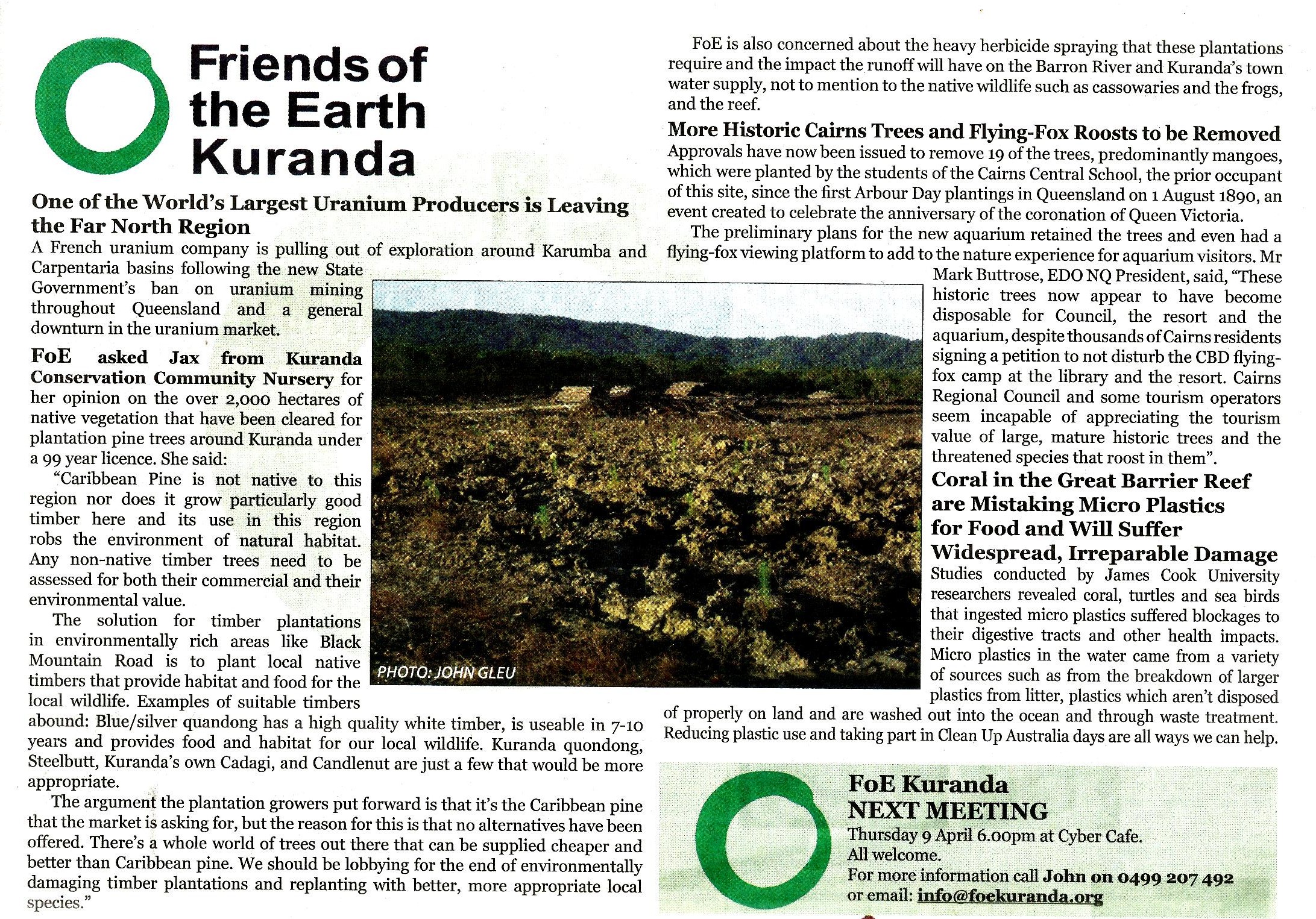