Friends of the Earth Australia have put in this submission to the Coordinator General's Office in Brisbane about KUR-World, a mega resort and satellite suburb proposed for the ecologically fragile Myola valley in Far North Queensland. Please send in your own submission. The deadline is Monday 14 January 5pm 2019.

Friends of the Earth (FoE) Australia opposes the proposed KUR-World development of a mega resort and satellite suburb in the Myola Valley. The KUR-World proposal would have negative environmental, cultural, economic and social impacts.

We support truly sustainable planning that

We believe the KUR-World Integrated Eco Resort fails to meet any of the above criteria.

We have the following concerns about the negative impact of this proposed development on the environmental values of the area especially:

Please see detailed submissions on the KUR-World Environmental Impact Statement regarding these issues below.

Negative effect of proposed KUR-World project on Southern cassowary habitat, connectivity and recovery plan for the species. (The overall objective of this recovery plan is to protect cassowaries, habitats and corridors from threats through better planning, monitoring and community involvement.) 1

The draft EIS recognises that 'the project area occurs in a broad section of landscape where north- south connectivity for certain rainforest fauna is relatively limited2 ' . This north- south connectivity is vital for the Southern Cassowary gene pool to be diverse and to provide a range of habitat and altitude for the species- which is vital for the cassowaries to survive climate change.3 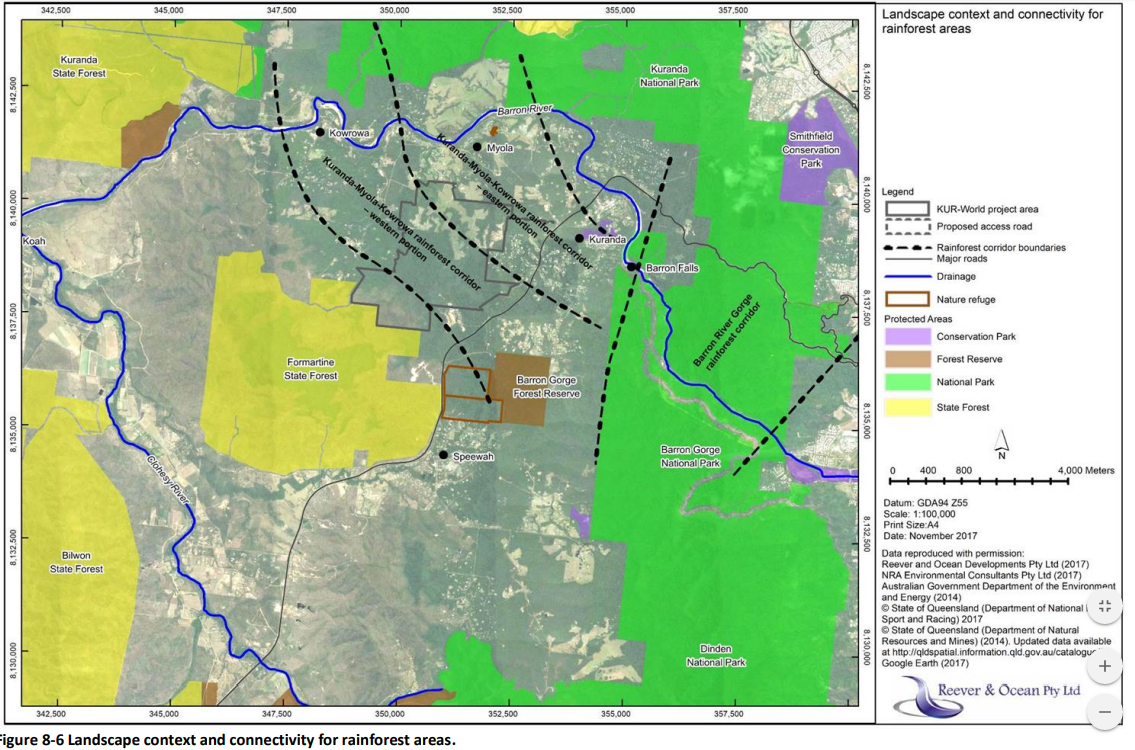 However KUR-World would bring many threats to the Southern cassowary including:

A. Loss of connectivity and habitat due to

1. clearing of remnant vegetation, which is essential cassowary habitat, for buildings and roads especially

a. the proposed access road to the Kennedy highway ,

b. the access road from the helipad in the south to the rainforest education centre

c. the access road from the rainforest education centre to the glamping

As Miriam Goosem writes 4 'When planning for new roads and powerlines, resource managers should strive to avoid critical habitats for rare and threatened species as well as areas of high biological diversity and abundance.'

2. the physical barrier of roads and buildings leading to avoidance of these areas by cassowaries

3. Light & noise pollution – e.g. the noise of frequent helicopter flights- up to 20 movements a day would stress cassowaries and cause avoidance of affected areas and so loss of habitat.

4. increased vegetation loss in cyclones due to clearings in the forest making it more vulnerable to damaging winds

5. erosion especially during construction and in the Wet

6. introduced weeds both from ornamental plants on the property (which apparently are already being bought) and from seeds brought in on footwear of construction workers, tourists and residents

Other negative effects of KUR-World would be:

These would be likely to increase with KUR-World with the introduction of residential lots on the property. The EIS suggests limiting pet ownership to small dogs. However the success of similar covenants has been low in the Kuranda region and , we believe, unenforceable where land tenure is freehold, which appears to be the intent of this development .

If fencing is allowed, connectivity would be affected. Also roaming small dogs are also capable of eating cassowary chicks and other small wildlife- and stressing adult cassowaries.

Southern Cassowaries are also threatened by diseases, such as avian tuberculosis, which is caused by the bacterium mycobacterium avium. It causes chronic wasting in infected birds and there is no known treatment. Pressures such as food shortages, habitat loss and the presence of predators such as roaming domestic dogs, are likely to stress cassowaries, making them more susceptible to disease .5

According to data from The Queensland Department of Environment and Heritage Protection Threatened Species Unit and Garners Beach Cassowary Rehabilitation Centre, there were 104 deaths from vehicle strikes between 1992 and January 2014.

Increased traffic in the Kuranda region due to the rapid increase in population which KUR-World would produce, would have the risk of producing the same tragic effect on roads on the project site and in the region especially the Kuranda Range Road.

We are in the middle of a drought in the Kuranda region at the time of writing. This is almost certainly impacting on the small population of cassowaries. Much erosion has taken place along creeks and river beds due to a large flooding event in March of this year which caused the loss of large areas of vegetation.

More extreme weather conditions- both drought and then severe cyclones- are predicted with climate change. Cyclones are the main natural threat to habitat and consequential cassowary food tree loss. Not only are cassowaries in danger from falling trees and rising waters during storms – they must travel further to find food, increasing their exposure to risks such as road crossings.

If we are serious about ensuring that cassowaries survive as a species on into the next century, despite climate change and natural catastrophic events, we need to ensure the cassowary population is more resilient by protecting and enhancing their habitat and its connectivity.

It would be irresponsible to approve this project that significantly threatens this already endangered species.

Several mitigation measures are proposed in the draft EIS:

As noted in the draft EIS, the use of poison would be problematic due to its effect on other native animals such as the northern quoll7.

Also it is more likely that the problem would be of roaming domestic dogs not wild ones- made worse by the residential component of KUR-World as noted above in B. Dog attacks.

The aim of reducing the likelihood of cassowaries being hit ( most effective strategy being to encourage cassowaries to avoid the roads) is not consistent with the aim of minimising the barrier effect so this is a challenging task for the most experienced ecologist.

50 km/gr for the access road, even if complied with, is fast enough to be unable to stop if a speedy cassowary jumps out in front and could result in serious injury of both cassowaries and humans.

Indeed it states in the EIS 'The residual impact is of concern for the Southern Cassowary because the local population is apparently small, and therefore sensitive to additional threats.'

It is impossible to critique this as it does not appear to have been prepared.

A significant degree of clearing has taken place on the property since it was bought in 20149.

To take baseline studies of the wildlife- including the cassowary- after this extensive clearing does not give a clear picture of the importance of the habitat to species such as the Southern cassowary.

A female cassowary can have a range of 5 to 10 square kilometres in degraded habitat and she can mate with around 4 males in this area. Interrupting her range with clearing can impact on mating behaviour and her ability to navigate in her territory.10

EIS recognises that '.The conservation value of forested regrowth is high in some instances'

It is no longer high in conservation value, sadly, when it is cleared- and even less when it is built on. Revegetation and water quality along creeks need to be monitored by wildlife experts in these areas.

Conclusion: There are no solution that can be seen for a project of this size and nature. Therefore the proposed project must be rejected. It is too big and in the wrong place.

The Kuranda Tree frog is endemic to the Myola Valley and Jum Rum creek catchments, some 14 creeks and associated seasonal creeks. There is an estimated population of less than 750 individuals over an area less than 3.5 km squared. 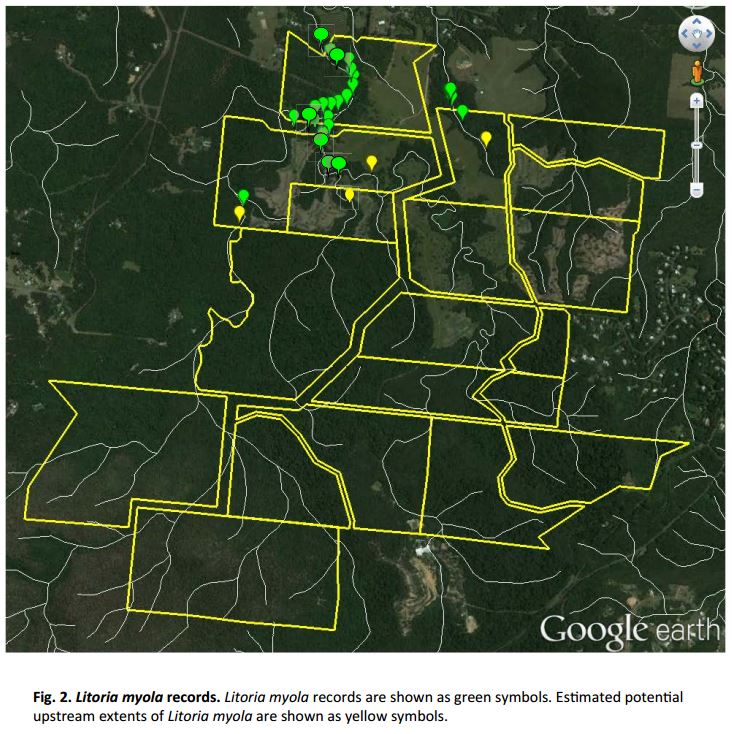 The proposed KUR-World project would affect 3 of these creek systems – Cain, Owen/ Haren and Warril creeks which contain approx. 40% of the known population of these frogs12 (Hoskin 2016)

A large dam constructed on the property in 201513 is already likely to have destroyed habitat of the Kuranda tree frog: 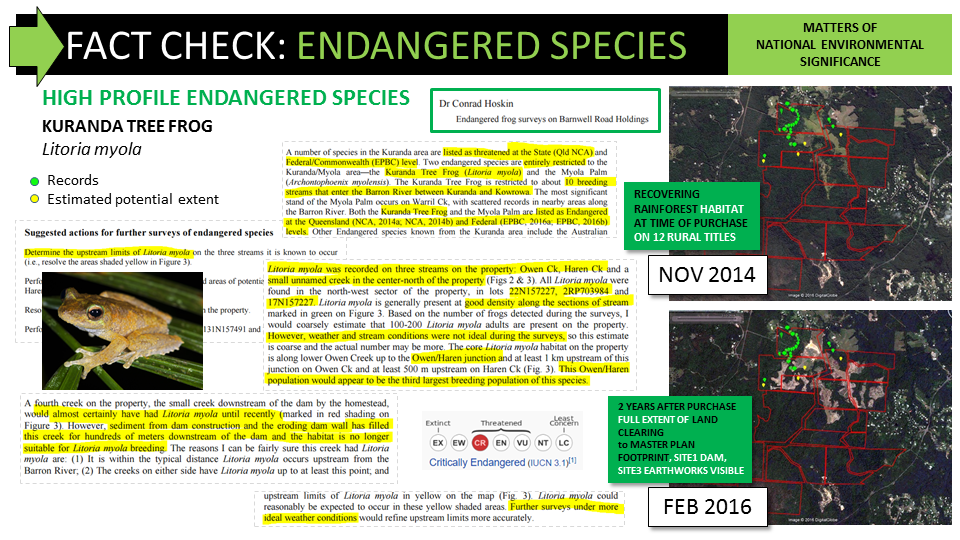 'A fourth creek on the property, the small creek downstream of the dam by the homestead, would almost certainly have had Litoria myola until recently (marked in red shading on Figure 3)14.

However, sediment from dam construction and the eroding dam wall has filled this creek for hundreds of meters downstream of the dam and the habitat is no longer suitable for Litoria myola breeding.

'The reasons I can be fairly sure this creek had Litoria myola are:

'In the adjacent unnamed creek, L. myola extends to within 300 metres of the head of the creek. Using this as a benchmark, I have estimated an upstream extent of the former occurrence of L. myola on the creek below the dam (see Figure 3). Remedial works have begun regarding the sediment issue in this creek, and these are ongoing'15

Construction of the access road through old regrowth forest will cut directly across the rest of the entire catchment for Warril creek (that has not already directly affected by KW site development) and there will ongoing pollutant loads in the creek as a result of road storm water run-off.

Proposed construction and intended operation of the KUR- World development will affect the aquatic habitat of the 10% of the L.myola population present on the KUR- World property and the remaining 30% in downstream populations of endangered frogs (L.myola ) plus L.dayii) along the length of Owen, Warril and even Cain creek.

Primarily the damage will be done through altering the flows of water on the site with secondary effects during construction and operation from soil and sediment erosion.

The Kuranda tree frog is already at risk of an exotic frog fungus called Chrytridiomycosis which invades the surface layers of the frog's skin.

Just last week the Kuranda Tree Frog Community Action plan was launched. This is the result of more than a year's work and conservation efforts so far have included tree planting for habitat restoration and riparian corridor linkage of breeding area, Kuranda tree frog monitoring and frog call training for the community.

' We'll be working towards …..entire habitat restoration for the frog, with fully connected 100m riparian corridors along all creeks..'

This would appear to be incompatible with the KUR-World development

We can see no solutions. The project is too big and in the wrong place, in a highly sensitive and unique ecological area.

The endangered Myola Palm is endemic to the Myola valley . The most significant

stand of the Myola Palm occurs on Warril Ck, with scattered records in nearby areas along

the Barron River. Both the Kuranda Tree Frog and the Myola Palm are listed as Endangered

The EIS states 'To address this, the project has defined buffers to each side of sections of Owen, Haren and Cain Creeks, which have been identified as breeding or foraging habitat for the Kuranda Tree Frog. Additionally, these buffers will protect habitat of other important species such as the Myola Palm and the Southern cassowary, while helping to maintain water quality and quantity'.17 •

However the ES recognises the risk of both 'inappropriate excavation or earthworks practices, during construction and/or operation, resulting in erosion and vegetation loss. ' and

'inappropriate vegetation clearing practices, during construction and/or operation, resulting in the inadvertent loss of vegetation (directly or indirectly due to erosion).'

It is worth noting that the proponent has already cleared to within a 10 metre buffer along both Haren and Owen creeks. This makes the issue of monitoring to ensure that existing buffers are maintained- and revegetated to 100m -very problematic in the future without a strict and independent monitoring programme -and the imposition of fines as needed.

Biosecurity risks such as the introduction of invasive weeds are increased with the movement of thousands of people and machinery on and off the property.

The above measures, while necessary, seem impractical. Therefore this project should be refused as it is too big and in the wrong place.

15 Ref: Dr. Conrad Hoskin Surveys for endangered frogs and other wildlife on