A BirdLife Australia State of Australia’s Birds report finds habitat loses is linked to increasing rarity of common species such as kookaburra, wagtails and peewees. Brisbane and the southeast is suffering from a loss of previous common species especially insectivorous birds like swallows and swifts. Also the beautiful rainbow bee eater, and even magpies populations are in decline.  Raptors like falcons, owls and eagles, which help regulate rat, mice and snake populations are also decreasing in Queensland, NT, WA and SA. Hollow-nesting birds like Kookaburra are down in a coastal strip from southeast Queensland to Victoria. Others in trouble are the double-barred finch, peaceful dove, black-faced cuckoo-shrike, brown honeyeater, and spangled drongo.

Birdlife Australia chief executive Paul Sullivan said that they were surprised that these common birds were disappearing. ‘These are birds that many Australians interact with daily,” he said. “We’ve known for some time that many rare bird populations are declining but we were not aware of the decline of these very common and iconic birds.”

A BirdLife, Australian Conservation and Environmental Justice report has also concluded that recovery plans for endangered birds is failing and this is because recovery plans mostly did not protect habitat even though this was the key to combating extinctions.  Launching the BirdLife Report Environment Minister Greg Hunt said the government had identified 20 bird species that it would aim to save over the next five years but said that the government had to work smarter and harder on wildlife.  “I want to bring these birds back far enough from the brink to survive” he said. “I want to enjoy the colour, movement and song they bring to our lives”.

FoE Kuranda has been asked to help find a solution to the number of cassowaries and other threatened wildlife, such as tree kangaroos and quolls, which are being attacked and killed by packs of dogs that roam through the Wet Tropics and bordering properties. A common complaint is that there is a lack of clarity in the legislation about what is the definition of a wild dog, or of what to do with these dogs after they have been captured. Often councils just release collared dogs to their owners, who let them go back to roaming through the forests, parks, picnic areas, swimming holes and along beaches again.  The problem of roaming menacing pig dogs is so bad in some areas such as around Tully and Daintree that people say they fear someone may be attacked and that they don’t feel safe even in their own home and property anymore. 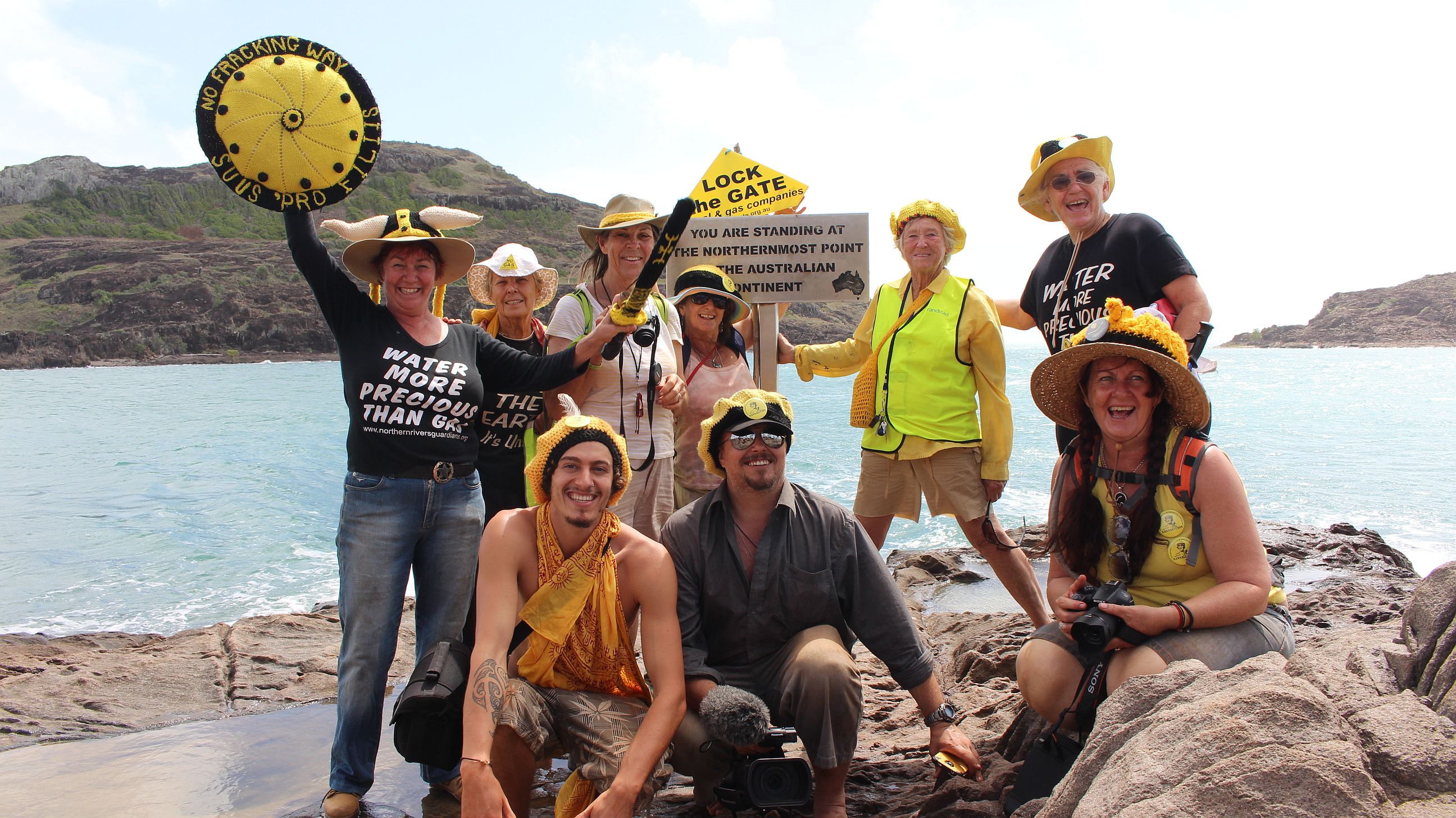 Knitting Nannas Walk to the Top of Cape York

12 Knitting Nannas Against Gas have walked over a 1,000 kilometres from Cairns to the very tip of Cape York to raise awareness about the risks of unconventional gas mining. Their concerns have been highlighted by a recent report in the Australian that said the loss of pressure caused by coal seam gas drilling “could be enough to stop bores flowing throughout the Great Artesian Basin, which is the sole water source for towns and farms across 22 per cent of Australia.”

The Govt Restores the Right To Object To A Mining Project

Due to public pressure the Queensland government has restored the rights of the community and landholders to be able to object to a mining project – a legal right which was taken away by the Newman government last year. The law however does not allow a land-holder, or traditional owner the right to refuse mining on their land, or country, even when it will mean the loss or destruction of waterways, aquifers, agricultural land, or significant cultural heritage sites. The government says that they will extend some more rights to landholders in the future. 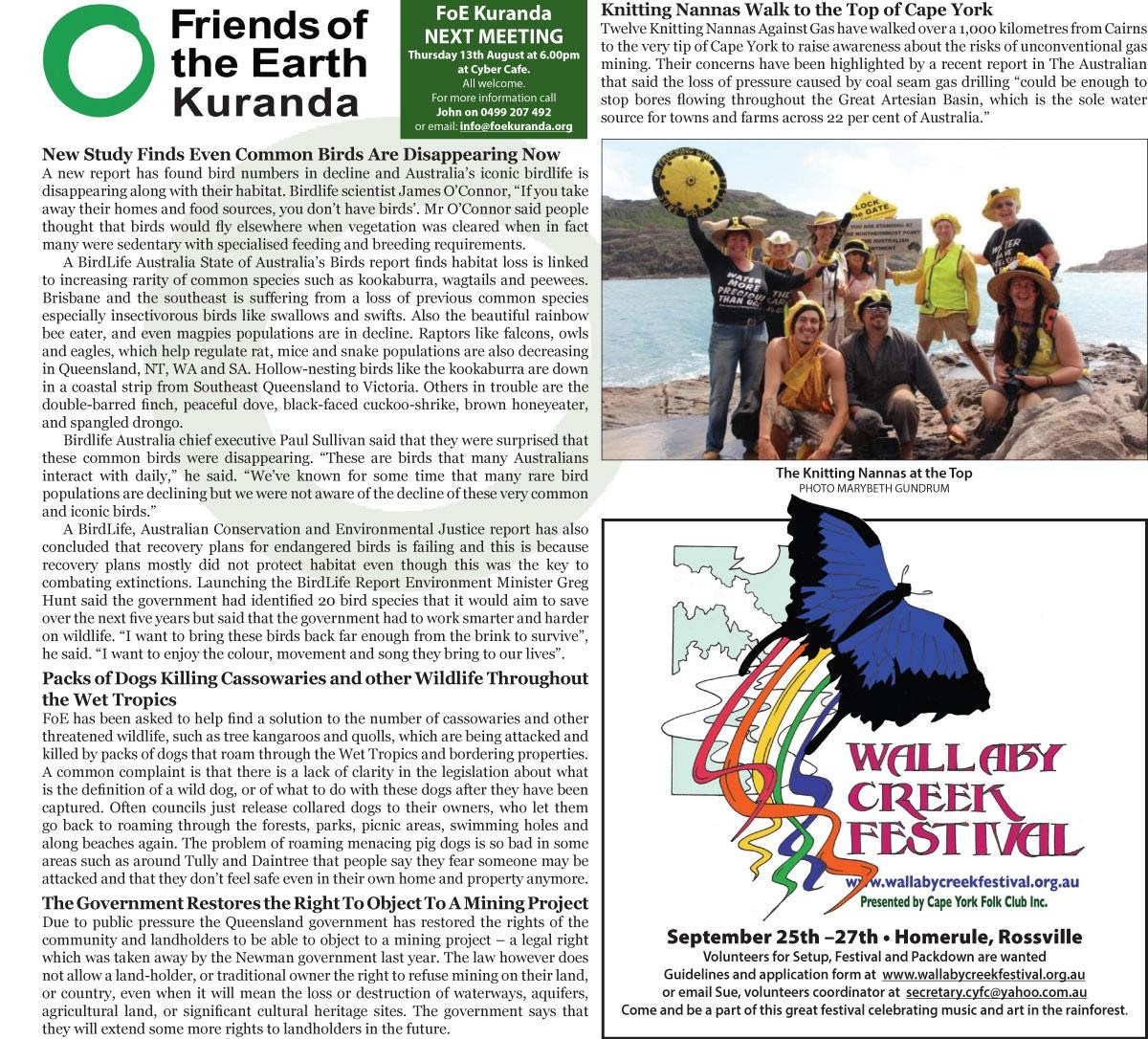