Federal Member for Kennedy Bob Katter has called the governments signing of the Trans Pacific Partnership Agreement (TPP) “the greatest blow to democracy in 300 years”, saying that “it amounted to nothing more than a new form of corporate colonialism.” “This agreement is not about trade, it’s about sovereignty,” Mr Katter said. “Governments will now be stripped of their power to regulate the behaviour of overseas companies.”  “It takes away our sovereignty and hands it over to the giant foreign owned corporations.”  Mr Katter said “We will be fighting the TPP and have forwarded a letter today to all Senators pleading with them not to turn the control of their country into the hands of foreign corporations.” “We will be moving for the Treaty’s disallowance as soon as Parliament resumes.” 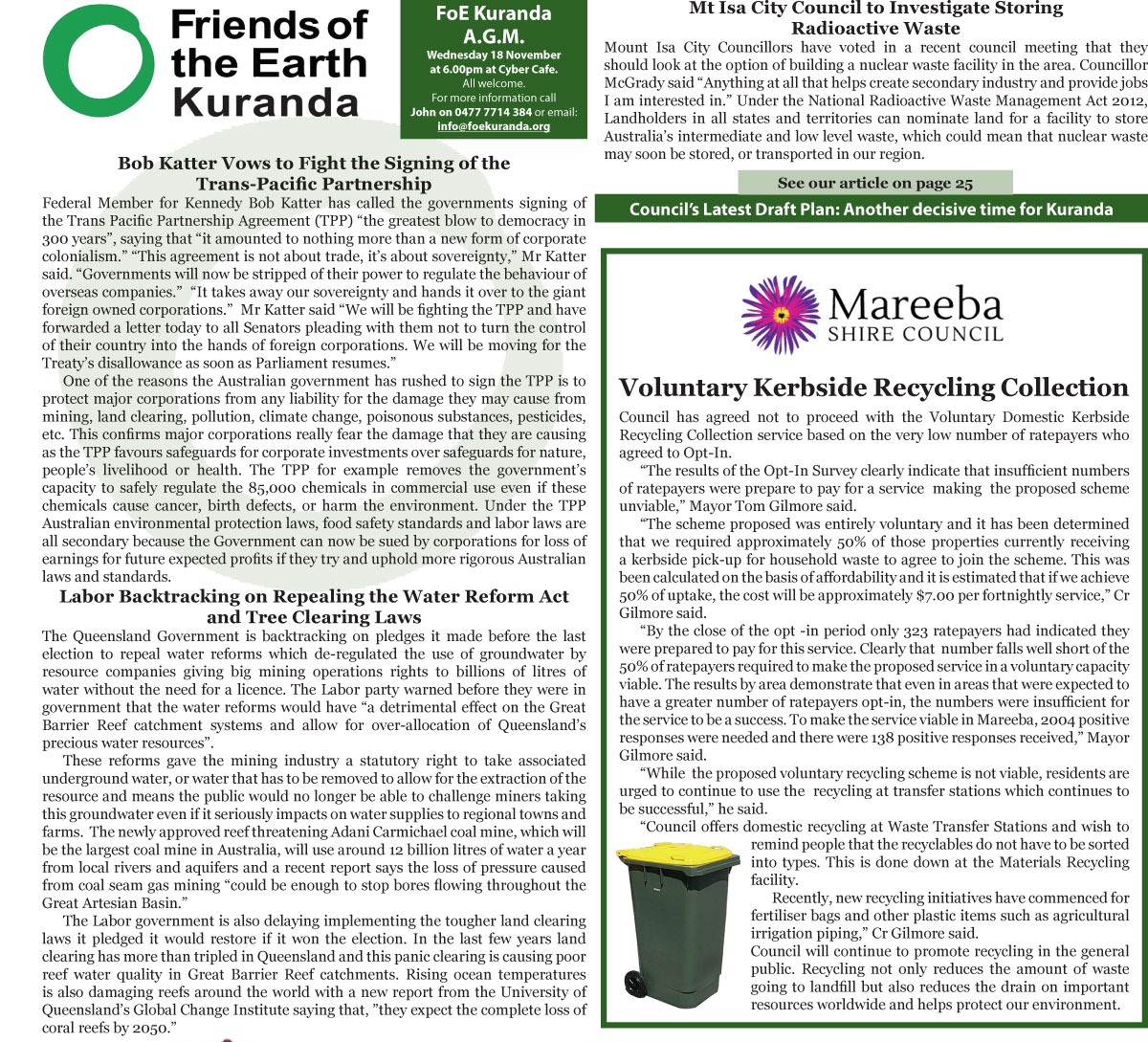 One of the reasons the Australian government has rushed to sign the TPP is to protect major corporations from any liability for the damage they may cause from mining, land clearing, pollution, climate change, poisonous substances, pesticides, etc. This confirms major corporations really fear the damage that they are causing as the TPP favours safeguards for corporate investments over safeguards for nature, people’s livelihood or health. The TPP for example removes the government’s capacity to safely regulate the 85,000 chemicals in commercial use even if these chemicals cause cancer, birth defects, or harm the environment. Under the TPP Australian environmental protection laws, food safety standards and labor laws are all secondary because the Government can now be sued by corporations for loss of earnings for future expected profits if they try and uphold more rigorous Australian laws and standards.

The Queensland Government is backtracking on pledges it made before the last election to repeal water reforms which de-regulated the use of groundwater by resource companies giving big mining operations rights to billions of litres of water without the need for a licence. The Labor party warned before they were in government that the water reforms would have "a detrimental effect on the Great Barrier Reef catchment systems and allow for over-allocation of Queensland's precious water resources".

These reforms gave the mining industry a statutory right to take associated underground water, or water that has to be removed to allow for the extraction of the resource and means the public would no longer be able to challenge miners taking this groundwater even if it seriously impacts on water supplies to regional towns and farms.  The newly approved reef threatening Adani Carmichael coal mine, which will be the largest coal mine in Australia, will use around 12 billion litres of water a year from local rivers and aquifers and a recent report says the loss of pressure caused from coal seam gas mining “could be enough to stop bores flowing throughout the Great Artesian Basin.” 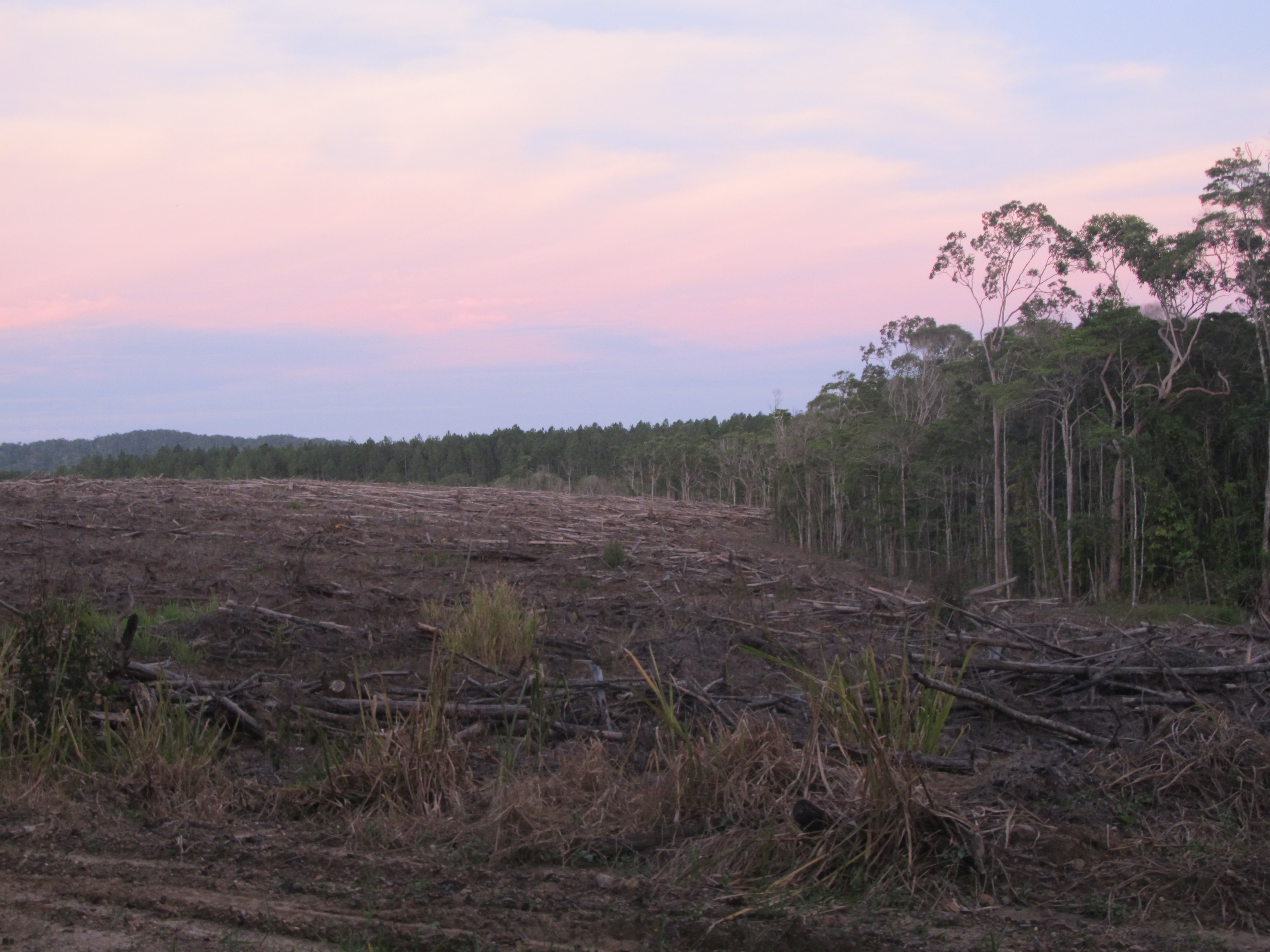 The Labor government is also delaying implementing the tougher land clearing laws it pledged it would restore if it won the election. In the last few years land clearing has more than tripled in Queensland and this panic clearing is causing poor reef water quality in Great Barrier Reef catchments. Rising ocean temperatures is also damaging reefs around the world with a new report from the University of Queensland’s Global Change Institute saying that, ”they expect the complete loss of coral reefs by 2050.”

Mount Isa City Councillors have voted in a recent council meeting that they should look at the option of building a nuclear waste facility in the area. Councillor McGrady said “Anything at all that helps create secondary industry and provide jobs I am interested in.” Under the National Radioactive Waste Management Act 2012, Landholders in all states and territories can nominate land for a facility to store Australia’s intermediate and low level waste, which could mean that nuclear waste may soon be stored, or transported in our region.