The Cook Shire Council Mayor Peter Scott said after the vote, “The introduction of crops which have been genetically modified to withstand pesticides and herbicides goes against our region’s clean green branding, which is a selling point for many our producers and is something Council will not support.”

“Although canola isn’t grown in Cook Shire, continued expansion of agriculture at Lakeland and potential development of Cape York earmarked in the Northern Australia White Paper all point to increased agricultural growth in the near feature; and the potential negative repercussions of genetically modified crops is something we need to be aware of. Use of this crop would encourage more broadacre use of Roundup, which has negative flow on effect to the environment and the clean, green marketing image of our produce.” 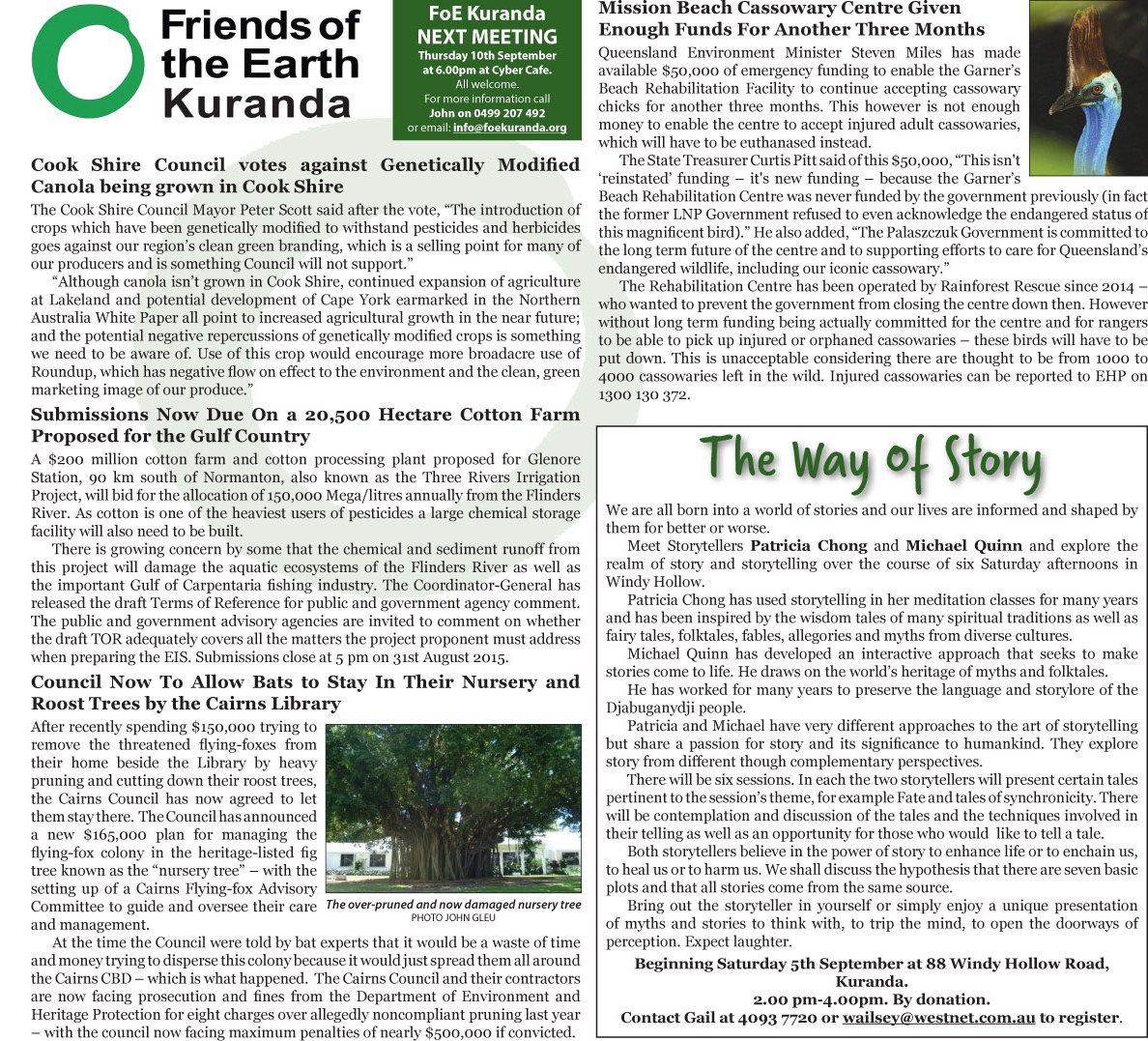 Submissions Now Due On a 20,500 Hectare Cotton Farm Proposed for the Gulf Country
A $200 million cotton farm and cotton processing plant proposed for Glenore Station, 90 km south of Normanton, also known as the Three Rivers Irrigation Project – will bid for the allocation of 150,000 Mega/litres annually from the Flinders River. As cotton is one of the heaviest users of pesticides a large chemical storage facility will also be built.
There is growing concern by some that the chemical and sediment runoff from this project will damage the aquatic ecosystems of the Flinders River as well as the important Gulf of Carpentaria fishing industry. The Coordinator-General has released the draft Terms of Reference for public and government agency comment. The public and government advisory agencies are invited to comment on whether the draft TOR adequately covers all the matters the project proponent must address when preparing the EIS. Submissions close at 5 pm on 31 August 2015. 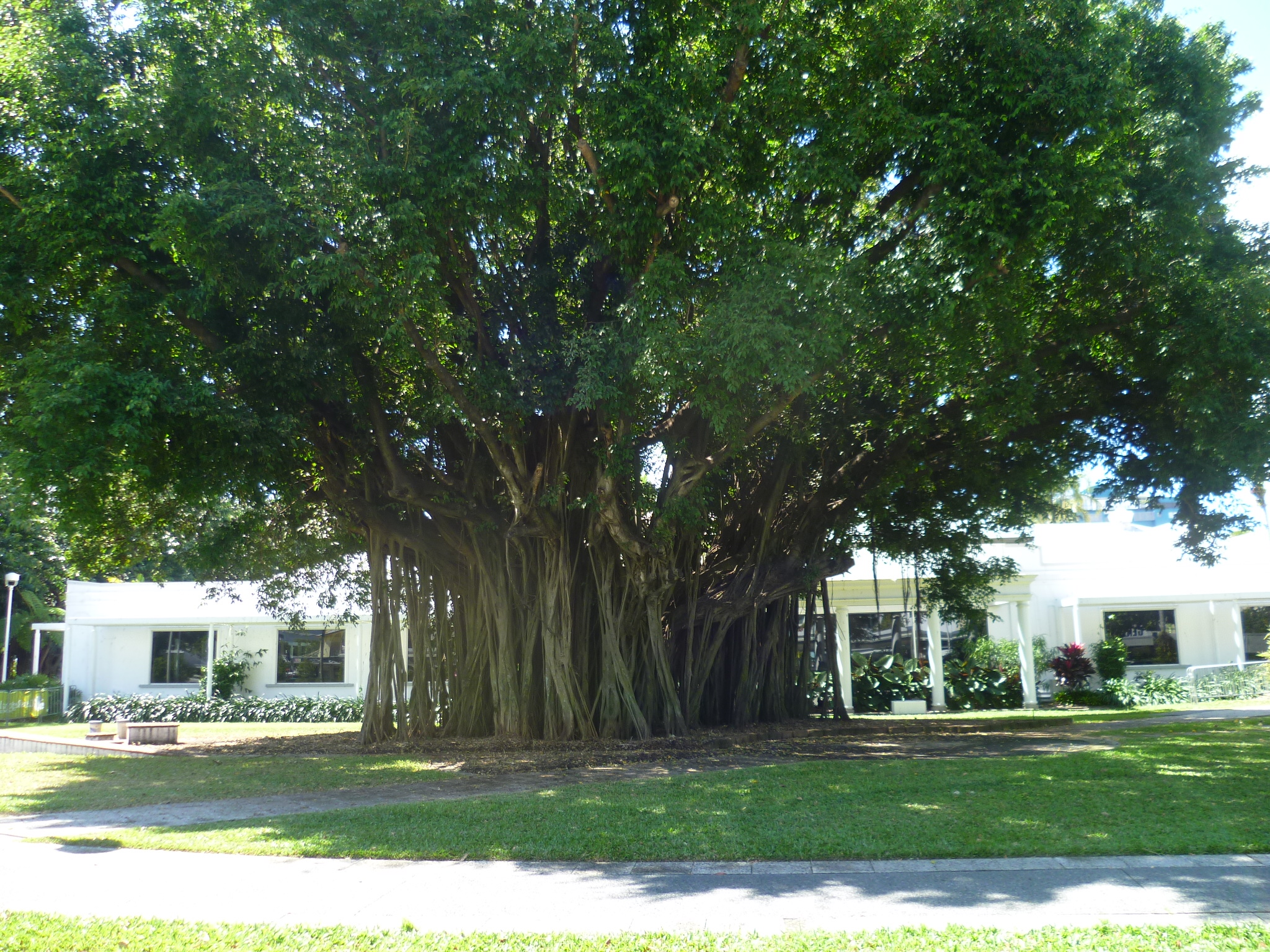 Council Now To Allow Bats to Stay In Their Nursery and Roost Trees by the Cairns Library
After recently spending $150,000 trying to remove the threatened flying foxes from their home beside the Library by heavy pruning and cutting down their roost trees – the Cairns Council has now agreed to let them stay there.  The Council has announced a new $165,000 plan for managing the flying fox colony in the heritage-listed fig tree known as the “nursery tree” – with the setting up of a Cairns Flying Fox Advisory Committee to guide and oversee their care and management.
At the time the Council were told by bat experts that it would be a waste of time and money trying to disperse this colony because it would just spread them all around the Cairns CBD – which is what happened.  The Cairns Council and their contractors are now facing prosecution and fines from the Dept of Environment and Heritage Protection for eight charges over allegedly noncompliant pruning last year – with the council now facing maximum penalties of nearly $500,000 if convicted.

Mission Beach Cassowary Centre Given Enough Funds For Another Three Months
Queensland Environment Minister Steven Miles has made available $50,000 of emergency funding to enable the Garner’s Beach Rehabilitation Facility to continue accepting cassowary chicks for another 3 months. This however is not enough money to enable the centre to accept injured adult cassowaries, which will have to euthanized instead.
The State Treasurer Curtis Pitt said of this $50,000, ‘This isn’t ‘reinstated’ funding – it’s new funding – because the Garner’s Beach Rehabilitation Centre was never funded by the government previously (in fact the former LNP Government refused to even acknowledge the endangered status of this magnificent bird).”  He also added, “The Palaszczuk Government is committed to the long term future of the centre and to supporting efforts to care for Queensland’s endangered wildlife, including our iconic cassowary.”
The Rehabilitation Centre has been operated by Rainforest Rescue since 2014 – who wanted to prevent the govt from closing the centre down then. However without long term funding being actually committed for the centre and for rangers to be able to pick up injured or orphaned cassowaries – these birds will have to be left unattended, or be put down. This is unacceptable considering there are thought to be 1000 to 4000 cassowaries left in the wild.  Injured cassowaries can be reported to EHP on 1300 130 372.