The Dept of Forestry has informed FoE that the HQ Plantations holds a 99 year licence for 4,200 hectares of Kuranda State Forest which is being progressively clear felled and replanted with Caribbean Pine.

The Plantation says that they use helicopters to spray a mixture of glyphosate and fluroxypyr herbicide at the rate of 100 litres per hectare to kill any weeds or regrowth of the native vegetation. Fluroxypyr is listed on the label as being highly toxic to freshwater fish and aquatic invertebrates and glyphosate has just been reclassified by the World Health Organisation a month ago as ‘probably carcinogenic to humans’ – based on the fact that it is found to be carcinogenic to animals.

The reclassification of glyphosate by the WHO is of great concern as the chemical runoff from the pine plantations goes into the Barron River which is used as Kuranda’s town water supply. Spray drift is also seen as a problem with the close proximity of homes and Kuranda town centre being just a few kilometres away.  The nature corridors that have been left along creeks and streams for the wildlife such as cassowaries are totally inadequate considering the aerial spraying.

The selling of this plantation licence as part of the Bligh government asset sales without proper consultation was clearly ill advised considering that the government is now having to spend hundreds of millions of dollars to implement ways to reduce this type of agricultural and chemical runoff that is seriously damaging the reef.

FoE thinks it is time to call for an end to this type of industrial logging adjacent to the World Heritage Area which changes diverse native forests into single species plantations – and especially if the wood is to be used for woodchips.

There is also a petition calling for the empty block opposite the Cairns Library to be turned into a parkland and flying fox roosting area to help protect the species whose population has greatly declined in the past decade. Some authorities fear the species could be extinct within a decade if their current rate of decline continues. The CBD colony which the Council has been trying to disperse by heavily pruning and cutting down their roost trees may hold as much as 10% of the total Australian population of the species.

The Cairns ECOfiesta is a festival with a difference, weaving environment, community and economy into a festival atmosphere for a day of fun, friendship and eco-inspiration. The ECOfiesta celebrates and showcases our unique natural environment, tropical lifestyle and green economy. 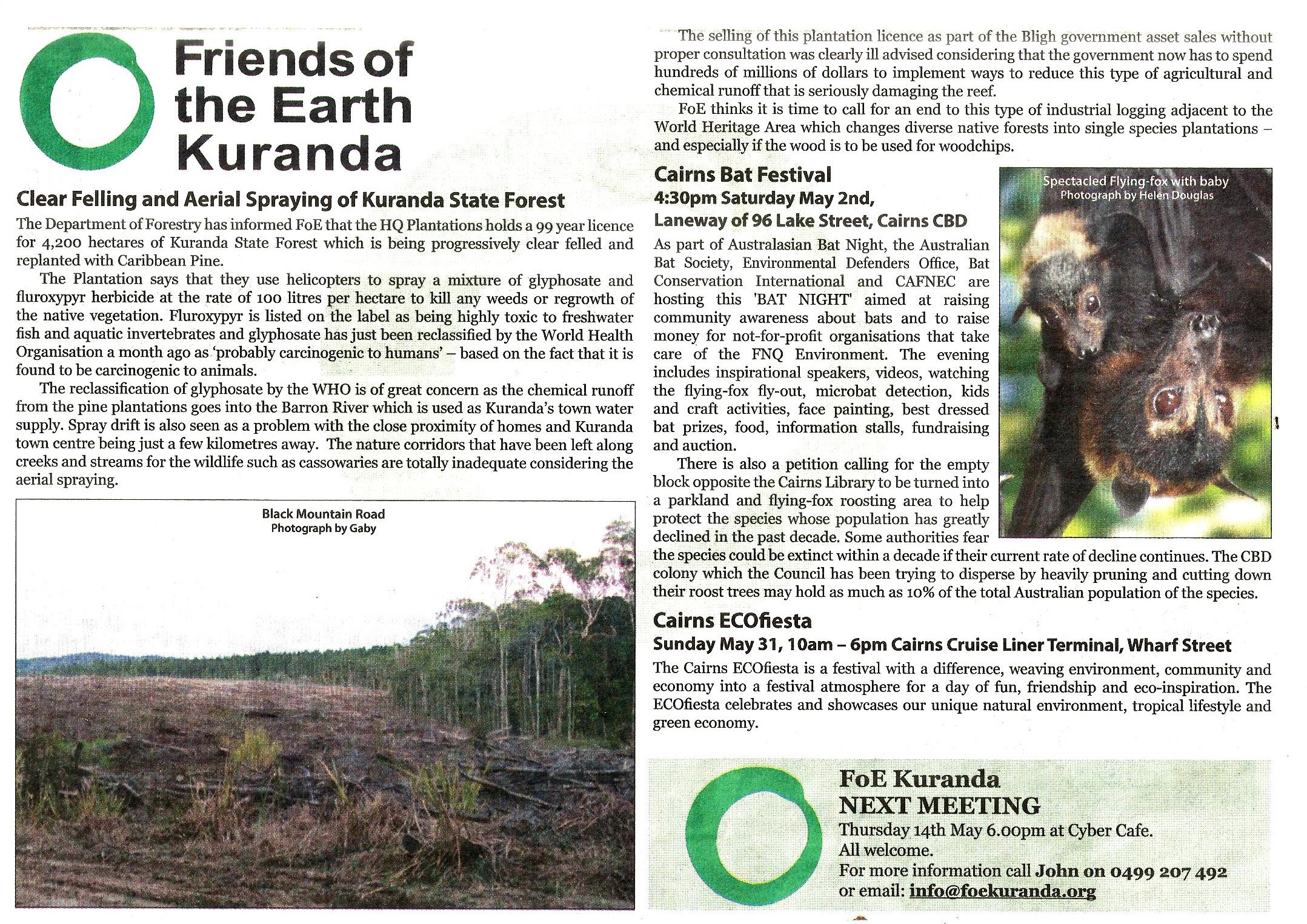