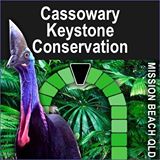 February 2019 I left my job after three years working as the live onsite manager of Garners Beach and caretaker of the Garners Beach Cassowary Rehabilitation Centre located in Mission Beach where I rescued and cared for sick, injured and orphaned cassowaries.

I was able to negotiate with the director of DES (Department of Environment and Science) a world first to hand rear a three day orphaned cassowary to a successful release to the wild. This was a positive step in cassowary conservation outcomes. During this time I was able to create beneficial contacts at all levels of Government and create positive relationships with individuals working in environmental services, learning a great deal about how Government manages endangered wildlife and public safety concerns which I was able to use to our advantage with the responsible dog ownership campaign.

FNQROC have now developed the Animal Management and Wildlife Stewardship program as a response to CKC’s lobbying local regional Councils across the Wet Tropics and producing evidence of the effect of roaming dogs to public safety and wildlife conservation.

Some of the FNFOE members and myself attended Bob Katter’s Safe Waterways Bill held in Cairns. With information I learnt through running the Rehab Centre and the responsible dog campaign, I was able to add weight to successfully stop it going through to arm farmers with fire arms to go around shooting crocodiles. I was able to bring the narrative back to roaming dogs as statistically a much greater threat to public safety which was heard by the Environment officer with FNQROC. Yahoo! Double win!

After ceasing my job at the Cassowary Rehab Centre CKC, I was invited to join the Cassowary Recovery Team as the only group working on the impact of roaming dogs on cassowary conservation and other threatened wildlife.

CKC was invited by the Cape York Research Station to survey cassowary habitat and numbers after cyclone Trevor hit Lockhart River. I walked on country with two Traditional Owners looking to rescue any sick , injured or orphaned birds. During this time I conducted talks at the local public school and with the Indigenous Ranger Station regarding dog management impacts and pig hunting problems we had had across the Wet Tropics. There was great feed back and communication was established.

CKC was interviewed for an article featured in Australian Geographic together with Dr David Westcott and Wren Mclean discussing threats to cassowary future survival. This was published in the October Issue.

It is with a very heavy heart after all these wonderful successful stories, in June this year I lost another family of five cassowaries ( F, M & 3 x Chicks) that frequented my property.

The regal healthy seven year old female was killed on the road in a 80km speed zone where overtaking is permitted. On several nights I had more issues with unrestrained hunting dogs trespassing within my property and the World Heritage neighbouring. The male and two chicks have not been seen since and one chick was recovered with a limp and was placed in the Rehab Centre.

I showed my disgust at this shocking outcome at the Cassowary Recovery Team meeting and was offered support by Wet Tropics Management Authority to write to the Department of Transport and Main Roads to request signage to highlight “You are entering a World Heritage site” to raise the respect and appreciation of the area.

I also was given assurance that in the future local Council and DES would start working together on cassowary/dog interactions.

I am currently working with CSIRO for the next 12 months on thermal imaging of cassowaries from my property and across the road from my driveway to check for driver behaviour. I live in a cassowary death hotspot that I hope to change.

In addition, the proposed purchase by Mainland Property Holdings of more than 230 local homes, caravan parks, commercial spaces and empty blocks of land – plus its plan to buy Dunk Island –would increase traffic.This is very concerning for the survival of the cassowary around Mission beach. It is not clear exactly what is planned but this is something to keep an eye on.

Please check your e-mail for a link to activate your account.
Take Action! Become a Member Donate
Tweets from foefnq More from @foefnq on Twitter